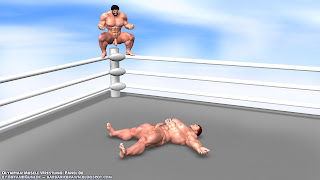 Hercules climbed to the top of the turnbuckle and balanced himself upon the stone 'ropes' that were attached to its sides.  He stood confidently on the edge of the wrestling ring, big chest thrust outward, enjoying the warm breeze that blew through his father's domain.

He squatted low and snarled at Ares, who remained where he lay before.  Hercules felt pride that he was able to keep his big bro down.  Despite his half-human blood, he was still the mighty Hercules!

The demigod jumped and attempted a devastating aerial body splash! 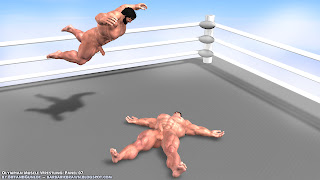 With a roar, the demigod descended upon Ares' vulnerable body!  He would use his full weight to knock the breath from the god of war, pin him, and end this match quickly!

But something was wrong...!  As he fell to the mat, he noticed Ares turn his head toward him and flash a sneering grin!  It was too late to stop his descent! 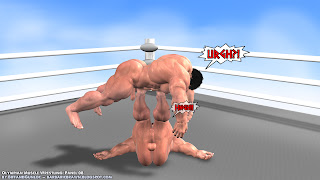 The powerful, manly god raised his mighty legs and caught Hercules in midair!

Hercules grunted in shock, unsure of what to do!  He never realized that Ares had set him up for a trap!

Ares held his little brother's heavy weight upright with a grunt.  He laughed heartily as he lowered and lifted his legs repeatedly, using a humiliated Hercules as a resistance weight to exercise his powerful limbs.
Posted by Lucky Stallion at 2:58 PM