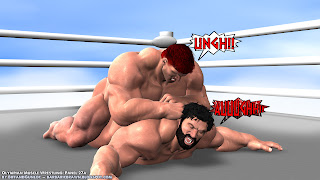 Ares forced Hercules onto his belly as he mounted him for their first time as master and slave.  The demigod collapsed under the weight of the musclebound god.  With a grunt and one well-aimed thrust, Ares' slick godhood slid inside Hercules' hole!

The demigod screamed in agony as his depths were skewered by the war god.  His hole clamped down around the girth of the hot invader, but could do little else except endure its assault.

Ares gave Hercules a small gesture of mercy: he allowed the demigod a little time to adjust to his massive cock.  Hercules groaned at the foreign feeling of being filled with his big brother's throbbing, leaking godhood.  He could feel Ares' hot breath on his sweaty back; the victor's almost musical grunts of arousal burned his ears and reminded him of who it was who had won the right to mount and penetrate. 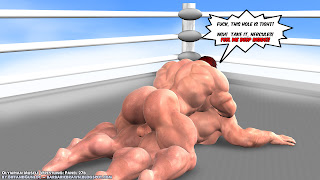 The war god began a steady rhythm.  He started slow, only pulling out a couple of inches before thrusting back in again.  Every few moments, he would add a little more.  Soon, Hercules was moaning in total ecstasy as Ares deep-dicked his hole and pounded his prostate, fucking away the last remnants of his pride as a hero of the world below.

"Fuck, this hole is tight!" Ares grunted, his hips wildly thrusting and his cock plowing roughly at his prize.  "Ngh!  Take it, Hercules!  Feel me deep inside!!"
Posted by Lucky Stallion at 11:02 PM