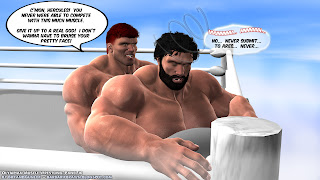 Dizzy and unable to stand on his own, Hercules leaned against the turnbuckle for support and moaned helplessly.  The world around him was spinning, and his head throbbed horribly.

"C'mon, Hercules!" Ares said with a loud laugh.  Hercules hated that laugh more and more each time he heard it.  "You never were able to compete with this much muscle."

He grabbed Hercules by his thick, meaty hips and rubbed them lewdly.  His godhood pressed firmly against the half-human's bare butt, reminding him of the heavy price of failure.

"Give it up to a real god!" Ares arrogantly continued.  "I don't wanna have to bruise your pretty face!"

Ares was glad to hear it.
Posted by Lucky Stallion at 1:39 PM