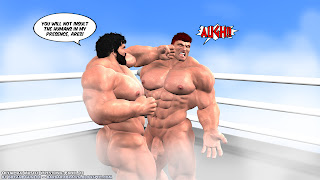 Hercules struck first, sending his fist crashing into Ares' hard, square jaw!  The war god grunted at the sudden impact and stumbled back a bit.

"You will not insult the humans in my presence, Ares!" Hercules grunted and sent another punch into Ares' gut.

Ares loathed how much Hercules seemed to care for those insignificant creatures.  Men were no better than beasts of burden to the god.  They were made for his amusement and to worship him.  Hercules' every feat of heroism actively prevented those things, but now he'd finally put an end to his brother's obstruction!
Posted by Lucky Stallion at 1:56 PM