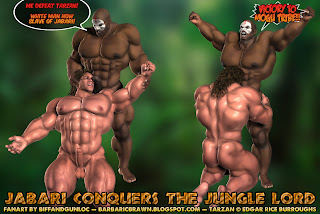 Jabari, mightiest warrior of the Mogu tribe who lived deep in the dark jungles of Africa, stood muscle to muscle with the white man known as Tarzan.

This Tarzan had constantly thrown his weight around the jungle, influencing its laws and ways with his power.  Such audacity angered many of the jungle's native sons.  One of them finally stepped up and challenged this arrogant 'king of the jungle' to battle!

Tarzan, who soon succumbed to the might of the black stud, was driven down to his knees and put in his rightful place.  Jabari thrust his throbbing cock against the fearful face of his conquered opponent and proclaimed, "Me defeat Tarzan!  White man now slave of Jabari!" 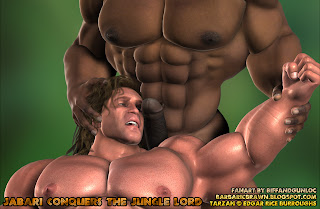 The former jungle lord was then made to suck the cock of his enemy as tribute to his triumph.  Tarzan's lips and tongue worshiped the hard, leaking shaft of the mighty Jabari as the African shouted for all to hear, "VICTORY TO MOGU TRIBE!!"

As Tarzan swallowed the black man's potent seed, he never realized that his sexual servitude to Jabari and the Mogu was only just beginning...
Posted by Lucky Stallion at 7:48 PM