The evil Skeletor, prime nemesis of He-Man, the most powerful man in the universe, had finally obtained a power that helped him claim victory over the blond musclehead and conquer Eternia once and for all!

Click the link below to see this three-panel mini series! 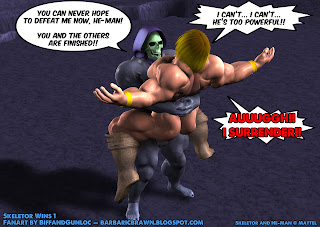 "I can't...  I can't...  He's too powerful!!" the Eternian grunted as he struggled to free himself from the blue-skinned villain's arms.

"You can never hope to defeat me now, He-Man!" Skeletor gloated.  With one final, bone-crushing squeeze, he shouted, "YOU AND THE OTHERS ARE FINISHED!!"

He-Man screamed in agony!  And not even the mighty He-Man could hold out forever!

"AUUUGGH!!  I SURRENDER!!" he cried in submission!  He-Man was finally defeated! 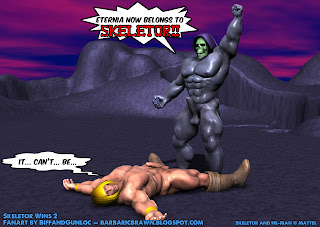 He-Man was dropped to the ground like a sack of meat, where he moaned in disbelief.

Skeletor stood victorious over the body of the fallen hero.  He raised his fist to the sky and shouted, "ETERNIA NOW BELONGS TO SKELETOR!!"

His thick manhood grew to full length as he basked in the glory of his ultimate victory! 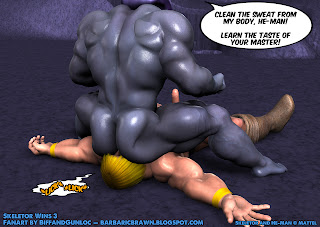 Skeletor's first desire was to humiliate his long-time nemesis.  He squatted low over the head of He-Man and waited for the telltale sign that the blond muscleman was looking directly up...

Skeletor quickly seated himself upon the fallen hero's handsome face!  He ground his butt downward, making sure that He-Man's lips met his hole!

"Clean the sweat from my body, He-Man!" Skeletor commanded.  "Learn the taste of your master!"

Knowing that it was all over, He-Man yielded to the villain's demand.  He stuck his tongue out and began to bathe the rear of the man who would forever rule Eternia.

He-Man had failed in his duty to protect the planet and its people.

But as Skeletor massaged and squeezed his leaking manhood, somehow it didn't seem all that bad.

The End
Posted by Lucky Stallion at 11:30 PM