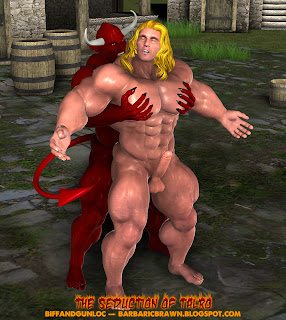 Talro, the golden-haired musclestud from Barbaria, was walking through the village one warm spring day, when out from the shadows arrived Kzak, the trickster demon!

The red-skinned menace came up from behind, and before he could defend himself, Talro was in a stupor of devilish seduction!

Kzak had an uncanny ability to spot weakness in mortal men.  Knowing immediately that Talro's was his chest, Kzak grabbed hold of the barbarian's beefy pectorals and began to knead them between his evil, burning fingers.  Those fingers pinched and pulled unmercifully at Talro's enlarged buds.

Poor Talro was unable to resist such pleasure.  His cock instantly sprang to full length!  He leaned back against the demon's hot, muscular body and moaned for more.

The demon laughed with his victory and dragged his forked tongue around the man's ear.  Kzak's fiery-hot breath blew against Talro's face, sending him into a dreamlike state.

Beads of sweat rolled down Talro's awesome body.  His heart pounded like a jungle man's drum in his excitement.  Enslaved by his lust, he was fully under the demon's control!

The barbarian offered no resistance as Kzak's thick, red cock thrust into his defenseless hole and began the task of pumping him full of scalding-hot seed...
Posted by Lucky Stallion at 6:24 PM