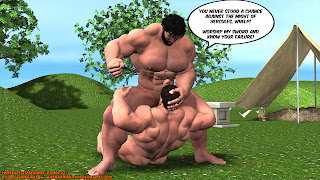 Hercules stood over his opponent's chest and squatted low.  He grabbed Sergios by his curly brown locks and forced him up.

Hercules pressed the face of his opponent into his groin.  His throbbing godhood and sweaty orbs mashed against the agonized human.

"You never stood a chance against the might of Hercules, whelp!" he grunted masculinely.  His firm hand grasped the back of Sergios' head and pressed it against his gyrating penis.

Sergios let out a soft moan of fear.  The scent of his former idol began to take its toll and caused his own cock to drool precum onto the grass below.

"Worship my sword," Hercules commanded, "and know your failure!" 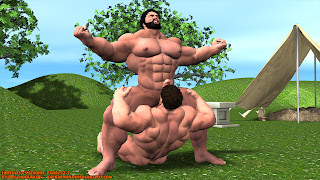 Overwhelmed by testosterone and adrenaline, Hercules threw his arms out and uttered a roar in a display of dominance!

Sergios looked up at the demigod and began to wonder if it was a mistake to have gone against the wishes of the god king.  Maybe he should surrender.  Confess to Hercules his failure and open his mouth in service to this massive embodiment of muscle...

No!  No, he couldn't go down in such a shameful way!  He wouldn't give Hercules the satisfaction of such a weak-willed submission!

Sergios let go of his foe's legs and struggled to stand and fight!
Posted by Lucky Stallion at 12:09 AM