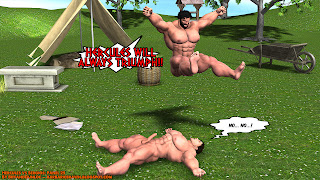 Hercules leapt from the ground and straightened his legs out, aiming his knee straight for his opponent's throat!

"HERCULES WILL ALWAYS TRIUMPH!!" he snarled with his descent!

Sergios' desire to lay on the grass and recover cost him valuable time in preventing Hercules' next move.

By the time he realized what was happening, it was too late! 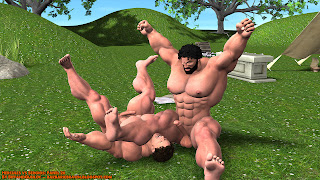 The human's throat was slammed with the massive weight of Hercules' leg!  So great was the impact, Sergios' muscular arms and legs flew into the air by reflex!

The challenger to Zeus' will cried out in a short, strangled grunt.  His trembling hands shot to Hercules' flexing leg and tried to force it away, but the demigod merely pressed down harder.

Hercules was feeling very pleased with himself.  In short time, he'd turned the tide of battle his way and no doubt instilled a sense of fear into the younger stud.

But Hercules wanted to play with his foe for a while longer.  Before he broke Sergios completely and delivered him to the arms of his father, he wanted the laborer to know who was the better fighter!
Posted by Lucky Stallion at 12:00 AM