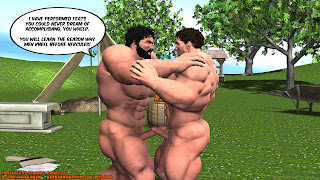 Hercules moved quickly.  He grabbed Sergios in a grapple and held the young buck in his firm grasp.  Sergios struggled, but soon realized that he couldn't escape!

"I have performed feats you could never dream of accomplishing, you whelp," Hercules taunted.

Sergios stood transfixed by the fire in his former idol's eyes.  Hercules' vigor was renewed -- his fighting spirit burned with anger.

The swords of the two men clashed, rubbing together in a contest of their own.  Their manly appendages leaked and smeared precum upon one another in a display of pure masculinity.

"You will learn the reason why men kneel before Hercules!"
Posted by Lucky Stallion at 12:00 AM