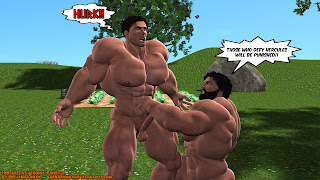 But Hercules took Sergios by surprise and struck first!  His fist slammed into his opponent's exposed muscle gut, sending tremors of pain throughout his body!

Spittle flew from the human's mouth as he struggled to keep from doubling over!

"Those who defy Hercules will be punished!!" the demigod snarled.

Sergios' legs quickly gave out and he crumpled to the ground, clutching his stomach.  He'd never felt such an intense blow in his life!  He curled up and moaned in agony as Hercules got to his feet and stood proudly over him.

Hercules placed his thick fingers around the middle of his mighty cock and slowly masturbated himself to the sight of Sergios writhing at his feet.

Just as the laborer caught sight of Hercules' erection, he struggled to stand.  If Hercules mounted him now, it would all be over!

By the time Sergios had risen, Hercules' godhood was throbbing hotly, anticipating the spoils of his victory.
Posted by Lucky Stallion at 12:48 AM