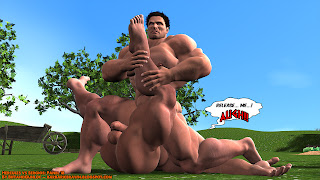 Sergios moved to seat his firm butt atop the chiseled abdominals of the living legend.

The demigod fought back against the feeling, but couldn't hold out for long.  He soon began moaning at the pleasure Sergios' skilled fingers brought him.  Those thick, beefy fingers rubbed deep into the muscle and massaged the tissues beneath the skin.

"Release... me...!" Hercules grunted, realizing that the human was softening him up.

Without hesitation, Sergios twisted his leg and jerked it to the side, causing Hercules to scream in agony!

Sergios didn't bother to ask for his opponent's surrender.  He wanted to take his time in dismantling the son of Zeus.
Posted by Lucky Stallion at 12:16 AM