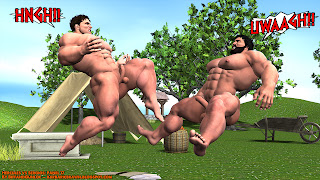 While Hercules was lost in his thoughts, Sergios seized the opportunity to grab the demigod's head and bring his knee crashing into it!

In a daze, Hercules merely stood there as the laborer leapt up and drove his knee again into his jaw!

The mighty hero bellowed in pain as he was sent flying back and to the ground!

Sergios smirked and looked over the downed body of his former idol.  Dominating such a stud caused testosterone to pump throughout his body.

He began to realize that Hercules was afraid of him for some reason.  He couldn't figure out exactly why, but he knew for certain that he would force the answer out of the mammoth muscleman by day's end!
Posted by Lucky Stallion at 12:00 AM