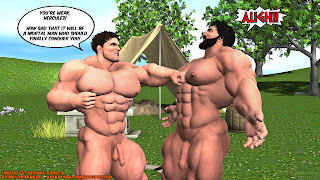 Sergios got the first shot in with a punch to the demigod's beefy pectorals!

"You're weak, Hercules!  How sad that it will be a mortal man who should finally conquer you!"

Hercules grunted in surprise at the power behind Sergios' blow!  He couldn't understand where this man's strength had come from!

Was it the ambrosia's doing?  Or perhaps he really was weak, after all...?

No!  No, he was Hercules!  He would destroy this man who dared to defy him!

And he couldn't let Sergios know about his immortality.  Such a revelation would only empower him!
Posted by Lucky Stallion at 12:11 AM