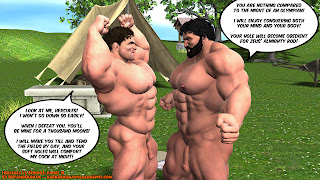 The two men stood nude on the sunny field of their impending battle.  Hercules' clearly-superior muscle seemed to dance and roll with every breath he drew.

"You are nothing compared to the might of an Olympian!" he snarled at the arrogance of this human.  "I will enjoy conquering both your mind and your body!"

His fists clenched as he finished, "Your hole will become obedient for Zeus' almighty rod!"

But that didn't intimidate Sergios.  He stood his ground and raised his arms in a display of his own physique.

"Look at me, Hercules!" he declared confidently.  "I won't go down so easily!"

Boldly, Sergios moved closer and pressed his hot and heavy pecs against Hercules'!  He stared the godling in the eye and matched muscle with his idol.

"When I defeat you, you'll be mine for a thousand moons!" Sergios continued.  "I will make you till and tend the fields by day, and your soft holes will comfort my cock at night!"

A thousand moons, Hercules quickly calculated, was about 30 years!

But that was of no matter.  He would win and bring this man to his knees!
Posted by Lucky Stallion at 12:00 AM