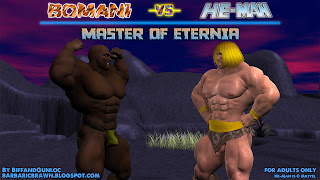 He-Man, defender of Eternia and the power of Castle Grayskull, suddenly faces a challenge from a powerful barbarian from another world.

Master of Eternia is my third series, this time starring He-Man versus my original character, Bomani.

Bomani is the son of the mighty black king Kugo.  All throughout his life, Bomani admired his father's many accomplishments.  But his latest conquest (the enslavement of the white warrior from Barbaria named Tuskar) only drove him wild with envy.

The prince wanted to prove to his father that he was better.  But nothing that he did would impress Kugo.  Many times, Bomani would wrestle Kugo, only to come out the loser.

One hot summer day, after wrestling Tuskar and fucking his frustrations into the slave's butt, Bomani had a brilliant idea.  There was a wise shaman man that lived his life in solitude somewhere in the jungle.  He would seek out the shaman and gain his help!

Almost as though it were fate, the shaman knew what Bomani could do to not only gain his father's respect, but even dethrone the king!

An alien planet somewhere among the stars was the key...
Posted by Lucky Stallion at 8:07 PM