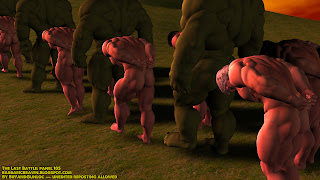 The humans of Brunnr were enslaved on sight and marched with their masters back to their new home of Grohmah.

The orc slavers sang praises of Overlord Krag and his victory over the weak and pitiful Ranzen.  The humans hung their heads in shame as the greenskins grunted proudly for Zug, Gorg, and Rogg.  Their crucial victories would be celebrated for many generations! 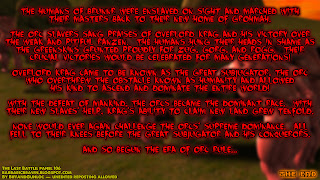 Overlord Krag came to be known as The Great Subjugator, the orc who overthrew the obstacle known as humanity and allowed his kind to ascend and dominate the entire world!

With the defeat of mankind, the orcs became the dominant race.  With their new slaves' help, Krag's ability to claim new land grew tenfold.

None would ever again challenge the orcs' supreme dominance.  All fell to their knees before The Great Subjugator and his conquerors.

And so begun the era of orc rule...

The End
Posted by Lucky Stallion at 1:12 PM