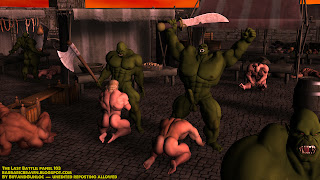 As the sun set over the lush fields of Brunnr Kingdom, the orcs finally raided the last bastion of humanity!  Overlord Krag lifted the defeated king high overhead as he marched victoriously into the city.

The demoralized men offered little resistance as the mighty, green champions flooded Brunnr and asserted their authority.  The softskins knelt before the triumphant warriors and gave of themselves to their new masters.  Krag looked on in pride as his brother orcs conquered! 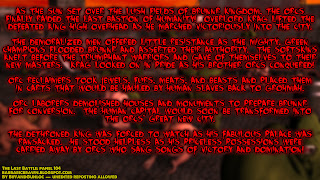 Orc reclaimers took jewels, furs, meats, and beasts and placed them in carts that would be hauled by human slaves back to Grohmah.

Orc laborers demolished houses and monuments to prepare Brunnr for conversion.  The human capital would soon be transformed into the orcs’ great new city.

The dethroned king was forced to watch as his fabulous palace was ransacked.  He stood helpless as his priceless possessions were carried away by orcs who sang songs of victory and domination!
Posted by Lucky Stallion at 1:08 PM