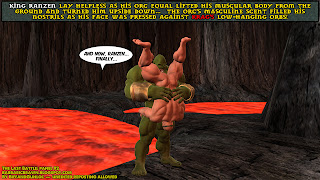 King Ranzen lay helpless as his orc equal lifted his muscular body from the ground and turned him upside down...

The orc's masculine scent filled his nostrils as his face was pressed against Krag's low-hanging orbs!

Unable to do much else, he held tightly to Krag's beefy butt cheeks.  Despite the abuse to his body, the human's kingly meat never went limp.  It continued to flow a thin strand of precum onto his chest and face, confusing Ranzen into believing that Krag's dominance was arousing him.