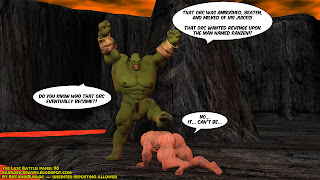 But Krag dropped him to the ground!

Ranzen struggled to sit up, but his weakened arms and legs would barely support his heavy body.

"That orc was ambushed, beaten, and milked of his juices!" Krag snarled.  "That orc wanted revenge upon the man named Ranzen!!"

Krag lifted his mighty leg and aimed his foot over the human's shaking back.

"Do you know who that orc eventually became?!"