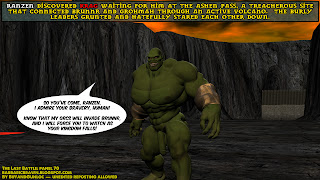 Just where he said he'd be, Ranzen discovered Krag waiting for him at the Ashen Pass, a treacherous site that connected Brunnr and Grohmah through an active volcano.

The burly leaders stood upon the site of the last battle, grunting and staring hatefully at each other.

"So you've come, Ranzen," Krag amusedly spoke through a sneer.  "I admire your bravery, human!"

Ranzen looked the orc over and grunted to himself.  Krag was big and confident -- a fine opponent to face.

"Know that my orcs will invade Brunnr," the overlord continued, "and I will force you to watch as your kingdom falls!"
Posted by Lucky Stallion at 12:23 PM