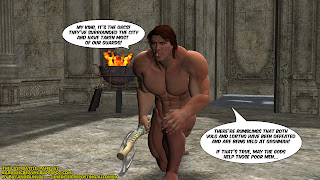 Kal, a young buck who once lived in a small village near the city, knelt before his lord.

"My king, it's the orcs!  They've surrounded the city and have taken most of our guards!"

Kal clenched his fist and grunted in disgust.  It was mere minutes ago that he'd heard them moaning -- begging the orcs for more.

"There're rumblings that both Vulg and Lortho have been defeated and are being held at Grohmah!

For most of his life, Kal had worshiped the barbaric Vulg and the valorous Lortho.  The thought of those two noble warriors at the mercy of the orcs sank his stomach.
Posted by Lucky Stallion at 12:42 PM