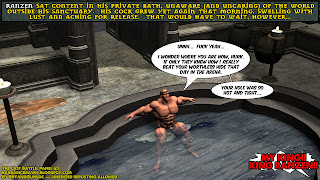 In his grand palace in the human kingdom of Brunnr, King Ranzen sat content in his private bath, unaware (and uncaring) of the world outside his sanctuary.

"Unnh...  Fuck yeah," he moaned quietly to himself.  "I wonder where you are now, Hurk," he whispered, referring to the king before him.

He could still remember the day that he challenged Hurk for the throne.  He savored the memory of how he had Hurk's chalice of wine drugged with the precum of an orc he'd defeated and milked the night before the match.

Hurk couldn't concentrate during the fight.  Thoughts of submission crept into his mind.  His cock hardened every time Ranzen flexed his powerful body.

In the heat of the moment, while Ranzen's sweat-drenched body pinned his own to the ground, Hurk shouted his surrender.  Horrified at what he'd just done, he desperately tried to tell his people that he didn't mean what he said.  He accused Ranzen of poisoning him!

Ranzen merely flexed, bounced his pecs, and arrogantly said, "This is the poison that bested our beloved king!"

The men of Brunnr laughed at their king and roared their approval for the challenger.

Ranzen forced Hurk to the ground.  Standing proud and tall over the King of Men, he promised Hurk that he'd make him enjoy what was to come.  With his people's scorn and the sap of arousal from an orc flowing through his body, the king spread his legs for the challenger and breathed his submission.

Hurk was defeated, dethroned, and fucked in front of his former subjects.

After everyone had left the arena to celebrate the crowning of a new king, Hurk fled into the night, never to be seen again.

"If only they knew how I really beat your worthless hide that day in the arena," Ranzen sighed to himself.

His cock grew yet again that morning, swelling with lust and aching for release.

"Your hole was so hot and tight..." he moaned, grabbing hold of his huge meat.  He wanted to relieve that moment again.

That would have to wait, however...

"MY KING!!" shouted a familiar voice from around the adjoined hall.  "KING RANZEN!!"
Posted by Lucky Stallion at 12:25 PM