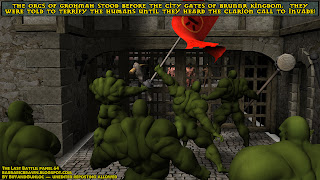 The orcs of Grohmah traveled far from home to stand proudly before their enemy's territory.

They stood before the city gates of Brunnr Kingdom, waving the banner of the orcs and brandishing crude weapons.

By order of the overlord, they were told to terrify the humans until they heard the clarion call to invade!

The men hiding behind the gates trembled at the ferocity of the greenskins.  They asked each other, "What is about to happen?" and, "Why are the guards allowing this?!"

The guards stationed to protect the capital city, however, were already under orc control.  They were on their knees, busily pleasuring orc cock while their new masters openly mocked and terrorized their brethren.

With every thrust into their holes, the fallen protectors of Brunnr accepted their fate with moans of approval.
Posted by Lucky Stallion at 12:57 PM