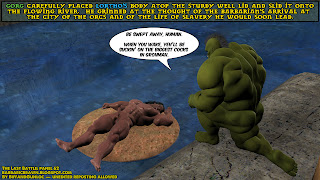 Gorg carefully placed Lortho's limp body atop the sturdy well lid and slid it onto the flowing river.

"Be swept away, human," he grunted, watching the defeated man get carried away by the river.  "When you wake, yeh'll be suckin' on the biggest cocks in Grohmah."

He grinned at the thought of the barbarian's arrival at the city of the orcs and of the life of slavery he would soon lead.

Gorg masturbated his cock to the thought of Lortho screaming his surrender over and over again as his brothers fucked the man into lifelong servitude.