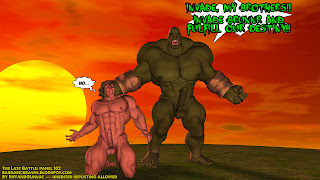 "INVADE, MY BROTHERS!!" the victorious overlord roared in a voice that reached the gates of the fortified city.  "INVADE BRUNNR AND FULFILL OUR DESTINY!!"

Ranzen breathed his disbelief over the fruits of his failure.  Though he felt horror at the sight of the army of orcs breaking through Brunnr's crumbling defenses, his cock remained hard and throbbing.

He watched in awe as these powerful brutes overwhelmed his men and dominated everything in their path.
Posted by Lucky Stallion at 2:14 PM