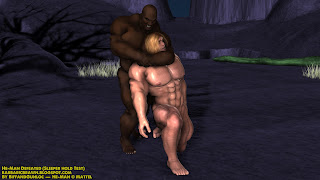 I've been crafting the Eternian battlefield where He-Man will be facing his greatest challenge yet, and thought I would test out one of my new poses on him and his studly opponent.

It's all still a work in progress.  Bomani might get a few changes, and He-Man's hair will almost likely be swapped out, too.  The battlefield for certain will be altered several more times before I'm satisfied with it.

So here's a teaser pic for my next series at Barbaric Brawn!  Enjoy!