For 19 years, Tarben has lived alone with his father, Hjalmar on their small settlement. 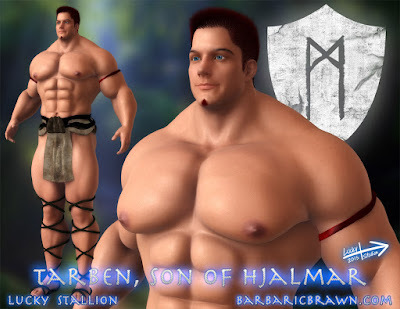 Hjalmar had been a fearsome warrior in the army when his beloved wife, Eira, became pregnant during his last return to home.  Late in her term, she had fallen ill with fever, prompting Hjalmar to rush home.

The village doctor and midwife assisted Eira and Hjalmar in the delivery of their baby, but moments after they had given their new boy his name, Eira succumbed and passed from the mortal plane.

Shortly after Eira's ceremonial cremation, a heavy-hearted Hjalmar retired his helmet and spear and left the village with Tarben for a new life.

A happy and healthy buck, Tarben idolizes his father in every way he can.  While Hjalmar hunts beasts and gathers meats and herbs for their home, Tarben has become skilled in the ways of cooking and sells their excess food at a marketplace near their home.
Posted by Lucky Stallion at 8:21 PM