Hjalmar is one of the human men of the world under the threat of the snakemen.  He, along with other newcomer, Vali (who will be seen in the near future), co-star in the story with Ylandarr. 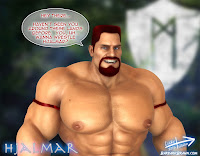 I wanted a rugged, bearlike man in Hjalmar.  He's a stud who would enjoy getting down in the dirt and wrestling any and all challengers to a squirming, moaning defeat.  Hjalmar particularly loves to kiss his opponents immediately after getting a submission from them, taking their breath away as his strong, meaty fingers roam toward their backside in search of his prize.

I'm still working out Hjalmar's purpose in the tale, but he's a deeply proud man who has a complex relationship with Ylandarr -- one that gets even more complicated with the advent of Prince Naja.
Posted by Lucky Stallion at 10:12 PM