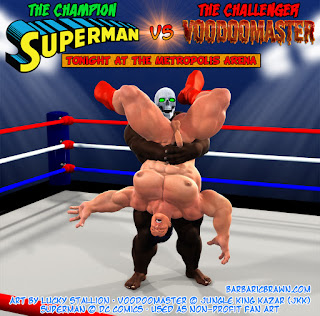 VoodooMaster is an original character of Jungle King Kazar (John Savage).  One of his many awesome stories at his old blog, Rants Roids n Rasslin, involved the muscular African god and powerful master of black magic.

Tasked by a wealthy incarcerated criminal to wrestle the Man of Steel in a freedom challenge, VoodooMaster also fights Superman for the ancient Rak-As-Tar -- a ritual that the people of Krypton and Nubaron used to settle disputes.

Last night, I was looking at the images I saved from his old blog and wanted to recreate one of the panels.  Using the bearhug poses from The Last Battle: Krypton vs Apokolips, I made a 3D version of VoodooMaster and put them in the wrestling ring.

After polishing it up a bit, I sent it to him this morning as fan art and he gave me permission to repost it here for you guys.

You can check out JKK's art at his DeviantArt account here.  There are a couple of images of VoodooMaster in his gallery right now, including the cover art of the follow-up versus Thor.
Posted by Lucky Stallion at 12:17 AM