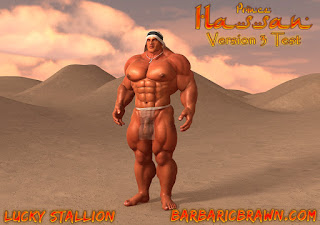 I was playing around in the studio earlier tonight when I had a sudden itch to do a third update to my character, Prince Hassan.  I think I can blame Alex and his latest Route 69 story for this Arabian urging. *grins*

Prince Hassan was originally rendered with LuxRender, way back in early December of last year.  Outside of some work here and there, I've since not really bothered with Lux anymore.  It just takes far too long on my machine and it doesn't give me the saturation that I desire.

I'm thinking of making my next story about this studly desert-dwelling royal (whose original backstory can be found here).  This one would likely take me a while longer than some of my recent stories, as I have a few different locations in my head of where I would place Hassan.  Plus, I'd need the extra time to create the characters he would interact with and the locations themselves would need setting up... 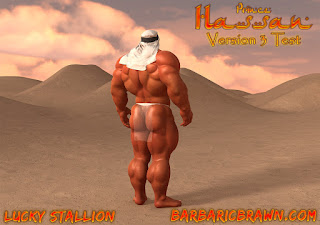 But if it does end up taking me too long, I'll likely put it on hold periodically to work on shorter fights and the like to post in between.  I've done that before -- it totally helps break the feeling of being bogged down by one project.