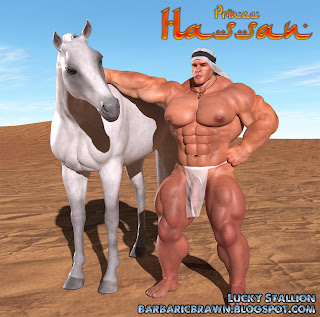 Hassan was one of many princes of King Fatih, a powerful and wealthy Arabian ruler.  Ever since his youth, the prince had appreciated the art and beauty of physical combat between the men of his kingdom.  As he grew into manhood, strong and packed with rock-hard muscle, Hassan began enjoying frequent wrestling matches with the royal palace guards.  The guards, eager to teach their prince self-defense and lusting after his body, were only happy to oblige his requests.

King Fatih always despised such crude and unprincely behavior.  He viewed wrestling and other close-contact fighting as barbaric -- something only savages without a sword would gladly resort to.  He chastised his men for indulging his son's foolish desires and forbade him to ever behave in such a way again.

But the spirit of fighting wouldn't leave Hassan so easily.  And rather than disobey his father's wishes, the prince decided that it was better to leave.

By the dark of night and with the help of his two favorite guards, the mighty prince fled the only home he'd ever known.  His white stallion, Zubair, by his side, Hassan will begin his adventures, traveling the lands, eager to engage with the commoners of the outside world.  It is through them that he will stoke the fiery heat that only wrestling can provide.


I also created a more family-friendly version (but still a bit provocative, maybe?) of Hassan.  You can find that version of him at the CafePress shop!
Posted by Lucky Stallion at 1:18 AM