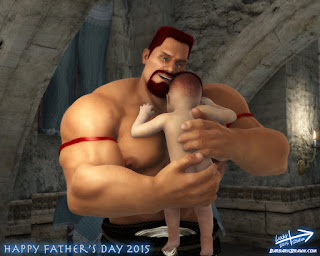 Something much sweeter for today.  This is the scene of the birth of Tarben, which I had actually worked on about a month ago but decided to hold onto for my Father's Day post.

Hjalmar's dear wife, Eira, had succumbed during the birth of their son, crushing his heart on an event that should've been joyous for them both.  It was that day that he retired from the military to provide the best life he could for Tarben.

Despite it all, he went on to turn out pretty well, and Hjalmar couldn't have been prouder.

A very happy Father's Day to everyone out there.
Posted by Lucky Stallion at 5:03 AM 1 comments After a long hiatus (burnout + needing to work on art), I’ve made a few more YouTube wrestling matches!

The first two stars Kensoudojo's Dante versus xearsol's Ryuuto.  Ryuuto has more of an MMA style that he brings to the ring. The second two welcome two new 23-year-old OCs to my roster: Jase and Kyle Landen, The Surf Bros.  They face off in a tag team fight against muscle mayor Mike Haggar and the Red Cyclone himself, Zangief!

Jase and Kyle vs Zangief and Haggar
The Surf Bros' Revenge
Posted by Lucky Stallion at 2:17 AM 2 comments

Update About My Selz Store

I just wanted to make a quick message about an e-mail that I received from Selz today.

"We're very sorry about this but the products and services your are selling do not comply with the conservative terms imposed by our banking partners."

I have my suspicions about who this unknown banking partner was.  But I must say, they were a gracious and rather progressive host, even though they had to toe the line eventually.  Hell, they even apologized twice in the e-mail.  Better than I received when I was shut down by another, similar site way back when.

But yeah, before I get to rambling about how utterly pathetic these "banking partners" are, I'll wrap it up here and say thank you to everyone who purchased through that store.  While my Lulu store remains open, I'll be considering other options at some point.  Maybe Patreon?  I don't know.

So much blog code clean-up to do now!  Urgh.
Posted by Lucky Stallion at 10:55 AM 4 comments 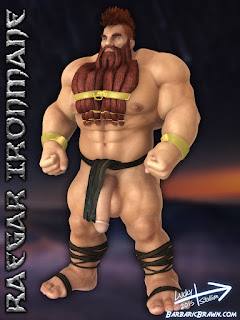 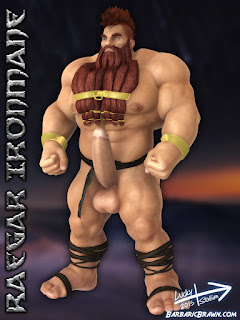 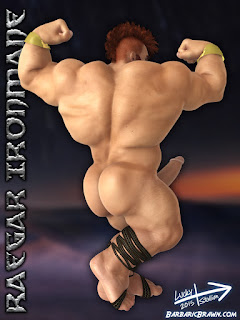 (For example of his size reference, the top of his mohawk just barely touches Hercules' nipples.)
Posted by Lucky Stallion at 1:29 AM 7 comments

I've been working on the story involving Prince Naja and Ylandarr (I swear I'll come up with a title for it eventually!) and was focusing on building a scene for a part that happens early on in the tale.  It's all still a work-in-progress and subject to change, but I thought you guys might like to take a look.

This takes place in the tower of Hagen, the Wise, where the aged human has happened upon the key that unlocks the mysterious Book of Men.  It is said to contain prophecies that will determine the future of the human race.

He discovers that the Book was written in the ancient language of man, one that is very difficult to decipher.  But what little the wise elder has been able to translate has already given him great pause... 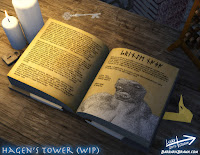 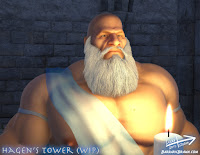