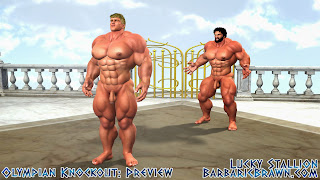 Hey, guys.  I've been taking a little bit of time thinking of what to do next, and I wanted to show you one work-in-progress panel of the five I've so far finished.

I won't say yet just how Alexi wound up in the sky with a very aggressive Hercules, but somehow the Russian stud must face the most challenging fight of his life and triumph!  In this battlefield of stone and steel where time and space know no meaning, there is only one ultimate goal: sweet victory or bitter defeat.

Some things about the setting may change from here until posting (which doesn't have an estimated time of arrival yet), but this is basically the feel of the story.
Posted by Lucky Stallion at 2:52 AM