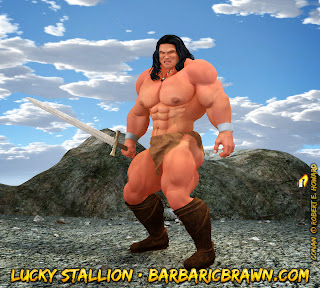 While going through my folder of projects past and future, I noticed Conan's and decided to give the big, burly barbarian a light touch-up.  I changed out his textures, gave him a sword and new loincloth, better boots, and new wristbands.  His facial structure also got a mild tweak and I removed his crown.  I think that my eventual goal with his one is his 'Conan the Adventurer' animation look.  Eventually!

Weary from his long journey into the mountains overlooking a village he recently saved from bandits, the Cimmerian stands before a beast man blocking access to the trail ahead.  A glint of malice gleams in the muscular brute's eye.  The barbarian squeezes the handle of his sword, ready for anything. 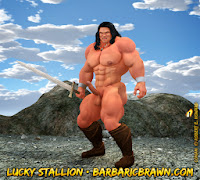 But the beast man is not without protection.  He wields a mighty battle blade big enough to fell three men in one swipe!  Conan and the hulking creature charge forward, ready and eager to engage in battle!

Each male knows that he will be rewarded with a hot hole in which to score a well-earned victory fuck!  With testosterone surging through their veins, the two clash swords and begin their fight!
Posted by Lucky Stallion at 2:11 AM