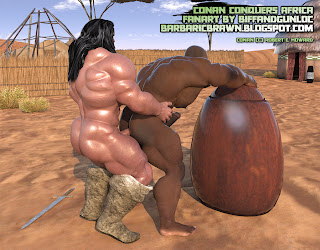 Conan, mighty muscular Cimmerian, sat in a warm tavern, enjoying the pleasures of drink and women as he listened to the men at a nearby table trade stories of conquests -- each more elaborate and boastful than the last.

The studly barbarian listened to one of them speak of a continent to the south called Africa, which was said to be inhabited by fierce, dark-skinned men with great power and big muscle.  Conan grunted to himself when the man spoke admiringly of one African's huge manhood.  Downing the last swig of his alcohol, Conan slammed his goblet back upon the table.  He squeezed his heavy balls under his fur loincloth and left the tavern -- much to the disappointment of those who admired the barbarian from afar.

After several days' journey, Conan happened upon a settlement under construction in the hot, sand-covered lands of the continent spoken of by the men back home.  It was also there that Conan spotted one of the continent's warriors!

This man was named Kugo, and he was known throughout Africa as the black king!  Kugo stood nude and proud as he surveyed the new construction he recently ordered.  Under his leadership, the people of the area were prosperous and thriving.

Conan decided to confront this man in a test of strength!  He stripped himself of his loincloth and ran forward to engage the African in wrestling!  Kugo was taken aback by the sudden arrival of this white man, but without hesitation, he accepted the challenger's foolish wish to become a slave!

Even without the benefit of his sword, this man was far stronger than Kugo had anticipated.  For the first time in his life, the black leader was out-wrestled and brought to his knees in total defeat.

Conan laughed at his foe's lack of skill.  He slapped Kugo's face with his erect cock and asked, "Are all men of Africa so weak?  I would have saved myself the journey if I had known a challenge worthy of a Cimmerian did not await me."

Kugo burned with shame and tried to fight back, only to be subdued with little effort.  He opened his mouth to curse the barbarian, but when his lips parted, the brute's fat, white cock was pushed into his mouth!

"I have been without a woman for many days now, slave.  Entertain me," Conan grunted.  "If you are not to be a worthy adversary, then I will take pleasure instead from your holes!"

Kugo was forced to service the unrelenting savage with his mouth!  The barbarian's salty and sweet precum gushed down his throat as his tongue worked over the head.

Conan moaned hotly as he partook of the spoils of victory.  "If only you could fight as well as you suck..."  He pushed himself all the way inside, causing Kugo to choke momentarily on his length.

Once he was satisfied with the African's mouth, he turned his attention to his foe's backside.  Kugo grunted and held onto the settlement's water supply urn for support.  The white man's fingers roughly probed his hole, preparing him to be bred!

Conan's slick cock slid smoothly into the black king's hot butt.  The Cimmerian moaned with lust as he used Kugo's hole to satisfy his needs.  He held onto the man's meaty sides and began to fuck fast and hard.  Kugo stifled a groan and struggled to remain silent throughout the ordeal.  He was grateful, at least, that his people were not present to witness his defeat.

Finally, the white barbarian erupted into his hole!  Conan's cock throbbed and bounced as it spurt its load deep inside!  He growled loudly in satisfaction and struck a double bicep pose.  He soon pulled out and ran his cock along the loser's dark glutes, wiping away the last of his globs of seed.

Kugo sat stunned on the hot, sandy ground and looked up at the victorious white man.  He panted and grabbed his erect cock to stroke himself to orgasm.  Conan laughed and flexed his muscles in a display of masculinity.

"This is what a real man looks like," he gloated, bouncing his pectorals.  He scooped up the beads of sweat that had formed across his mighty chest and flung them at Kugo.

As one last humiliation, the barbarian pressed his butt against the African's face, forcing him to clean the sweat from between his cheeks.  Kugo came as he did so, and he shot his heavy load onto the ground at the feet of the white champion.  Seed that he had wanted to bury in Conan's hole instead went to waste under the hot sun.

Satisfied with the outcome of the fight, the Cimmerian grabbed his sword and loincloth and left to once again find a fight worthy of Conan the Barbarian!
Posted by Lucky Stallion at 6:50 AM