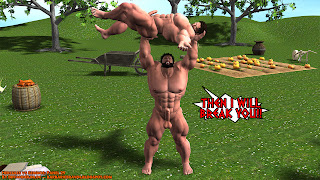 The laborer tried to escape the grasp of the demigod, but failed!

"THEN I WILL BREAK YOU!!" Hercules roared in a booming voice! 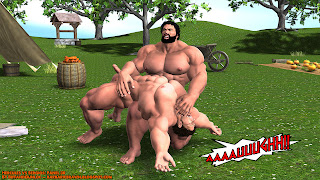 With one fluid motion, Hercules brought Sergios' back down upon his knee, executing a devastating backbreaker on the young buck!

Hercules' manly growls filled the heated air and mixed with his foe's screams of anguish.

The human lay across the knee of his former idol like a sacrifice upon a sacred altar.  He didn't bother to move, figuring that he wouldn't be able to anyhow.  He merely lay still as Hercules ran his rough and rugged hand over his well-defined abs.
Posted by Lucky Stallion at 12:05 AM