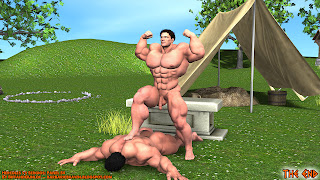 Hercules fell to the ground and groaned.  His master grunted, allowing him to rest his weary body.

Sergios placed his foot atop the back of the muscular demigod and raised his arms in a double bicep pose.

Mighty Hercules, once free to roam the lands and do as he pleased was now the slave of the human known as Sergios.  Many tales would be told of the human's defeat of the demigod, and -- just as Zeus originally feared -- many would come to worship him as a god on the earth.

Pleased with his pawn's victory over Hercules, Ares allowed the incredible strength that he bestowed upon Sergios to remain with the new immortal for the rest of his existence.

The End
Posted by Lucky Stallion at 12:02 AM