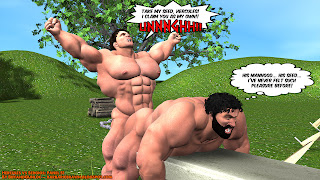 After an hour of intense fucking, Sergios could no longer hold back.  He released Hercules and threw his arms wide!

"His manhood... his seed..." Hercules thought silently, "I've never felt such pleasure before!"

Sergios placed his hands behind his head and allowed the hot sun to bake his incredible pecs and abs.  He bounced them quickly as his cock continued to deposit its well-earned load into the body of his defeated enemy.

It was a moment neither man would ever forget.  It was a battle of impossible odds, yet, somehow, a miracle allowed the littler man to emerge victorious over the might of Olympus.

Hercules would someday again fuck the holes of others, but he would never -- could never -- give up the incredible sensations of surrendering his own to the thick, throbbing members of others.
Posted by Lucky Stallion at 12:48 AM