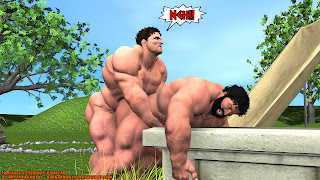 Sergios held his slave steady and began to fuck the hole that many men could only dream of invading.  Part of him was surprised that Hercules hadn't disputed his actions.  But as he stared at his own body, he began to realize that he truly was the stronger man.

Hercules cried out in pleasure with every thrust inside his body.  His backside began to tremble in surrender to the pummeling it endlessly received.  His hole sucked at the mighty cock invading it so roughly.  Its muscles squeezed and milked instinctively at its new master, never wanting to let it go.

The laborer grunted and his hefty meat spurt shot after shot of precum into the halfgod's tunnels, further lubricating his victory mating.  He laid his body over Hercules' and thrust his hips faster and harder, wanting nothing more than to seed the greatest earthbound conquest of his time!
Posted by Lucky Stallion at 12:08 AM