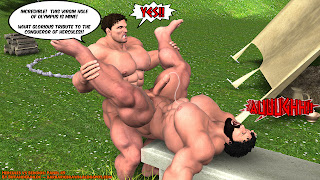 Sergios lifted the godling's legs high up and placed the tip of his cock to the hot, puckering hole of his former idol.

The human took a moment to fully take in his victory.  The low, needy grunts of his slave finally pushed him to thrust his manhood inside!

"YES!!" he groaned out in triumph!

Hercules screamed in agony as his master skewered his hole!  The soft, tight insides of the son of Zeus caressed Sergios' cock.  It submissively squeezed and massaged its invader.

"Incredible!" Sergios grunted over his slave's shouts.  "This virgin hole of Olympus is mine!  What glorious tribute to the conqueror of Hercules!!"

The triumphant human began a quick and steady fuck to the defeated demigod's butt.  The flesh of the two titanic studs slapped together lewdly as they mated.

Hercules' shouts of agony and humiliation soon softened and became pitiful mewls for more!  Sergios laughed arrogantly at the sounds the once-proud Hercules now produced.
Posted by Lucky Stallion at 12:09 AM