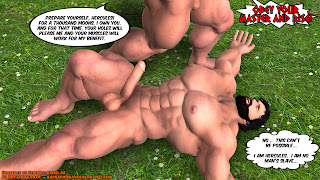 Sergios stood at the side of his new slave and struck a series of bodybuilder poses.  He could still hardly believe that his fate would lead him to become an immortal and vanquish the halfgod son of Zeus.

"Prepare yourself, Hercules!" he finally grunted, squeezing and tugging at his thick nipples.  "For a thousand moons, I own you.  And for that time, your holes will please me and your muscles will work for my benefit."

Sergios had many plans for this walking mass of male muscle.  He would force Hercules to perform many intense labors in the fields.  But for tonight, he would make love to the godling and assert his rightful place as master.

Sergios drove his foot into the loser's chest, snapping him from his thoughts.

"OBEY YOUR MASTER AND RISE!"

And with this first of many, many acts of servitude, Hercules did.
Posted by Lucky Stallion at 12:15 AM