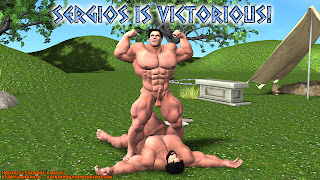 The human dropped his godly foe to the grass.  He stood over the beaten body of Hercules and raised his arms in a double bicep pose!

Sergios' cock stood tall and proud as he basked in the glory of his victory.  He had accomplished what no other man could: he wrestled and defeated the incredible Hercules, son of Zeus and most powerful man in the world!

Hercules lay panting and sore under the awesome body of his new master.  And though the prospect of being a slave to this mortal-turned-immortal frightened him, his cock remained rock-hard and throbbing.

Hercules was, at long last, conquered!
Posted by Lucky Stallion at 12:11 AM