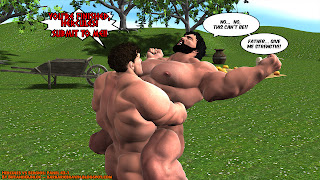 It was time to finish this battle, Sergios finally decided!

Feeling that it was only fitting that the most powerful man in the world be finished off with his own signature hold, Sergios scooped Hercules up and into a crushing bearhug!

Hercules immediately braced himself, but nothing could prepare him for what he felt next.  The musclebound demigod threw his arms and legs wide and screamed in pain as his opponent applied the pressure of one hundred men!

"YOU'RE FINISHED, HERCULES!" Sergios grunted.  "SUBMIT TO ME!!"

He looked to the sky and pled with Zeus, "Father... give me strength!!"

But the king of the gods did not take pity on his son.  Hercules had failed him, and, as punishment, would receive no support.
Posted by Lucky Stallion at 12:35 AM