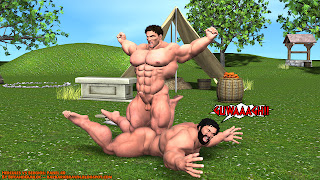 Hercules screamed in pain as Sergios brought his entire weight down upon his back!

He couldn't understand how this human managed to escape from his bearhug.  No man he'd ever placed in the hold had ever escaped without submission.  Not only had Sergios done the impossible, he'd also brought the living legend to the ground, crying out like a wounded beast.

The laborer felt incredible.  He raised his arms in a double bicep pose and bounced his pecs rapidly.  The power of the god of war coursed through his muscles, giving him strength that rivaled even Hercules!

But Sergios didn't dare waste a precious second questioning this newfound power's origin.  All that mattered now was bringing down this barbaric son of Zeus once and for all!
Posted by Lucky Stallion at 12:03 AM