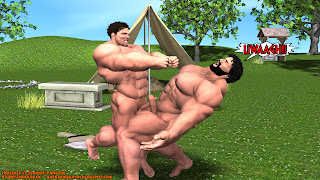 Sergios' fists slammed into Hercules' head with such force, the son of Zeus lost his footing and stumbled back and to the ground!

Hercules bellowed in pain from the strike.  With Sergios already on his downed body, he had no time to wonder how his opponent had summoned such impossible strength!

Ares squeezed his hefty balls as watched the tide of battle turn in the human's favor.  Satisfied with what he'd seen, Ares left the battlefield to sow the seeds of battle in the hearts of men across the world.
Posted by Lucky Stallion at 12:37 AM