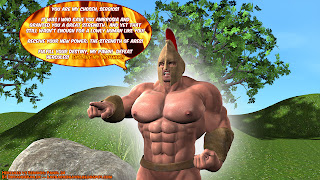 "You are my chosen, Sergios!" the unseen god spoke.  "It was I who gave you ambrosia and granted you a great strength.  And yet that still wasn't enough for a lowly human like you!"

Ares stared in disgust at the way Sergios teetered on the edge of submission.  But it wasn't entirely his fault; Hercules was far too strong for this one.

The god of war grunted at Hercules.  The demigod's strength and sense of pride would soon prove a nuisance for Ares' greater plans.  Sergios' inability to emerge triumphant meant that he would need to intervene once more.  But this time, he would be sure to get it right.

"Receive your new power," the god shouted, "the strength of Ares!"

Sergios suddenly felt the power of a hundred men flood his muscles!  The pains in his body faded, and his manhood throbbed furiously with need!  Somehow, he could now withstand the might of Hercules' bearhug!

"Fulfill your destiny, my pawn!" Ares laughed wickedly.  "Defeat Hercules!  ENSLAVE MY BROTHER!!"
Posted by Lucky Stallion at 12:11 AM