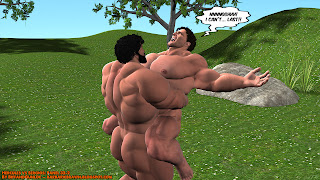 No matter how Sergios tried to fight it, Hercules' hug was like the mouth of a great lion whose jaws slowly squeezed the life from his tiring body!

The mighty cock of Hercules somehow found its way to Sergios' firm butt.  It brushed against the human hole between, subtly reminding it of its impending fate.

Sergios' strength was waning quickly, but somehow he held on for as long as he could!

This foe would soon be his!  Tales would be told for generations of Hercules' glorious triumph over the mortal-turned-immortal who dared challenge his authority!
Posted by Lucky Stallion at 1:20 AM