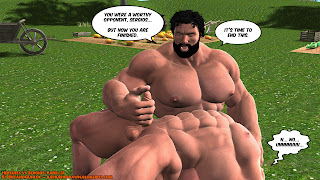 Sergios moaned quietly as Hercules took hold of his throbbing shaft.  The laborer burned with shame at the humiliation of having his manhood gripped by his enemy.  He thanked the gods that his uncle was away and had no chance of seeing him in such a state.

Hercules' thumb swirled vigorously around the plump head of Sergios' smaller cock, coaxing precum to flow from the tip.  His beefy fingers gently pumped his challenger's manly flesh up and down.

"You were a worthy opponent, Sergios..." Hercules grunted as he humiliated the man further.  "But now you are finished."

"N... no..." Sergios moaned in disbelief.  The hand of the demigod felt incredible on his shaft.  He struggled valiantly to not raise his hips up and give himself over to the son of Zeus.

"It's time to end this," Hercules said, finally letting go.
Posted by Lucky Stallion at 12:09 AM