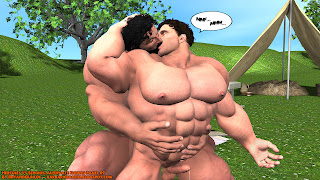 After an hour of intense fucking, Hercules grabbed his slave by his curly locks and pulled him upright.  Without allowing his sword of flesh to leave its sheath, he grasped Sergios' abdomen and held him close.

Hercules' hips continued to gyrate, fucking his cock deep inside Sergios' hole.  But when the human brought his head back and kissed him deep, Hercules was momentarily taken aback.

The two men wrestled tongues as they bred, and Sergios moaned into his master's mouth with every hot, passionate kiss.
Posted by Lucky Stallion at 12:02 AM